3D
Scan The World
4,500 views 385 downloads
Community Prints Add your picture
Be the first to share a picture of this printed object
0 comments

Statue of Aphrodite inspired by a Greek model dating from the 5th century BC.

The statue has sometimes been thought to be a replica, freely inspired by an original from the late 4th century BC, because of its resemblance to the Aphrodite of Capua (Museo Archeologico Nazionale, Naples) — a similar style Roman work, copy of a Greek original. The Venus de Milo certainly revives the classical tradition, but would appear to be a classicizing re-creation dating from the late 2nd century BC. The goddess's air of aloofness, the harmony of her face and her impassivity are stamped with the aesthetics of the 5th century BC; the hairstyle and delicate modeling of the flesh evoke the works of 4th-century sculptor Praxiteles. However, the sculpture reflects innovations that appeared during the Hellenistic period, between the 3rd and 1st centuries BC. The spiral composition, the positioning of the figure in three-dimensional space, and the small-breasted, elongated body are characteristic of this period. The goddess is arrested in time, holding her legs together as the drapery slides over her hips. Her nudity contrasts with the effects of light and shade of the finely-detailed drapery. 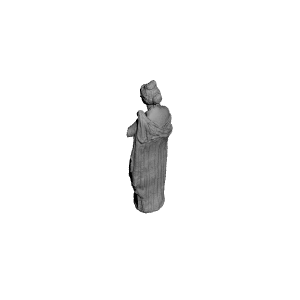