3D
Scan The World
1,444 views 91 downloads
Community Prints Add your picture
Be the first to share a picture of this printed object
0 comments

This sculpture depicts Aphrodite. She was an Ancient Greek goddess of love, beauty, and desire, Aphrodite(Roman name: Venus) could entice both gods and men into illicit affairs with her good looks and whispered sweet nothings.

In mythology, the goddess was born when Cronos castrated his father Uranus and cast the genitalia into the sea from where Aphrodite appeared amidst the resulting foam (aphros). Believed to have been born close to Cyprus, she was worshipped in Paphos on the island (a geographic location which hints at her eastern origins as a fertility goddess and possible evolution from the Phoenician goddess Astarte).

The sculpture was discovered in Gymnasium of Salamis 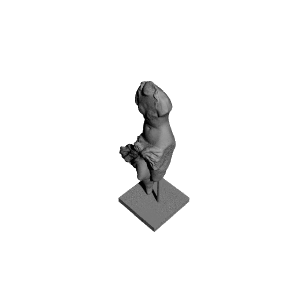