3D
Scan The World
3,008 views 333 downloads
1 collection
Community Prints Add your picture
Be the first to share a picture of this printed object
0 comments

This is a torso fragment of an ancient nude marble statue of Aphrodite.

Aphrodite is an ancient Greek goddess associated with love, beauty, pleasure, and procreation. She is identified with the planet Venus, which is named after the Roman goddess Venus, with whom Aphrodite was extensively syncretized. Aphrodite's major symbols include myrtles, roses, doves, sparrows, and swans.

The cult of Aphrodite was largely derived from that of the Phoenician goddess Astarte, a cognate of the East Semitic goddess Ishtar, whose cult was based on the Sumerian cult of Inanna. Aphrodite's main cult centres were Cythera, Cyprus, Corinth, and Athens. Her main festival was the Aphrodisia, which was celebrated annually in midsummer. In Laconia, Aphrodite was worshipped as a warrior goddess. She was also the patron goddess of prostitutes, an association which led early scholars to propose the concept of "sacred prostitution", an idea which is now generally seen as erroneous. 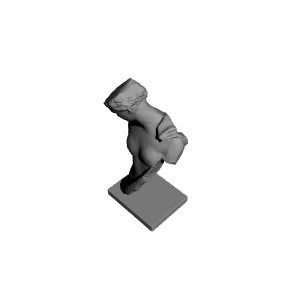