3D
Scan The World
3,059 views 141 downloads
1 collection
Community Prints Add your picture
Be the first to share a picture of this printed object
0 comments

This sculpture is a copy after the original by Kalamis erected in the temple of the Athenian Agora in 470-460 BC, after the plague the god had presumably driven away. Roman work of the end-1st—early-2nd cent. CE after a Greek bronze statue by Kalamis of ca. 370—360 BCE.

Kalamis made statues that were less rigid, and his subjects ranged widely. He worked primarily in bronze and made an Apollo Alexikakos (Averter of Evil) which stood in the Athenian Agora. The versatility ofkalamis recalls that of the damois artists of the Archaic period. he worked in gold and ivory, marble and primarily bronze. 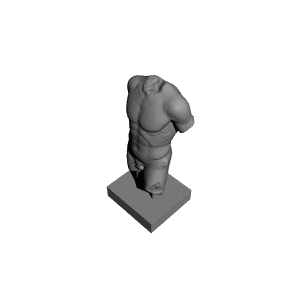