Statue of Artemis-Hecate or Muse

3D
Scan The World
3,120 views 112 downloads
Community Prints Add your picture
Be the first to share a picture of this printed object
0 comments

Statue of Artemis-Hecate or Muse

This sculpture is only partially preserved, hence it's quite difficult to identify who the sculpture depicts. It possibly could be an Artemis-Hecate or just Muse.

Hecate was the goddess who "haunted crossroads, graveyards, and was the goddess of sorcery and witchcraft, she wandered about at night and was seen only by the barking of dogs who told of her approach."  Artemis, in Greek religion, was the goddess of wild animals, the hunt, and vegetation, and of chastity and childbirth. In many sources such as the Euripedes's Seven Against Thebes, the reference to Artemis-Hekate can be found. Moreover, the worship and depicting of these two goddesses were overall surprisingly overlaying.

It's also possible that the sculpture depicts one of the Muses. The Nine Muses in Greek mythology have been an inspiration to artists since antiquity. They are (in alphabetical order): Calliope, Clio, Erato, Euterpe, Melpomene, Polyhymnia, Terpsichore, Thalia, and Urania. They are the daughters of Zeus, the Greek father of all gods, and Mnemosyne. 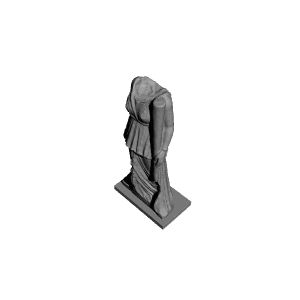