3D
Scan The World
2,877 views 118 downloads
Community Prints Add your picture
Be the first to share a picture of this printed object
0 comments

This statue is a Roman copy of a Greek sculpture of the 5th Century BC depicting Athena. Athena, the daughter of Zeus, is depicted standing wearing a helmet (typical with certain depictions of the goddess of war) but is unarmed. Her right arm, now missing, would have carried a weapon or guardian (familiar with The Varveikon Athena), whilst the left might have carried an olive branch, symbollic of victory. Her chest is adorned with the gorgoneion (head of the Gorgon), or commonly known as Medusa who was defeated by Perseus with the aide of Athena. The fine detail and carving of this rich Marble effigy could have been part of an imperial cult or as a work of propaganda. This would have been placed in the city forum, a few hundred metres from the place of its accidental discovery by workers in the courtyard of a school of Poitiers in 1902.

On the inventory register it suggests that the head could be of a different type than the rest of the body. Separated from neck, she was put together roughly as seen by the cavity in her chest. Her left hand is broken and the right hand side of her nose is broken. The right forearm is broken adn the front of the right foot is missing. The bronze decorative elements that would have adorned this sculpture have since been lost. 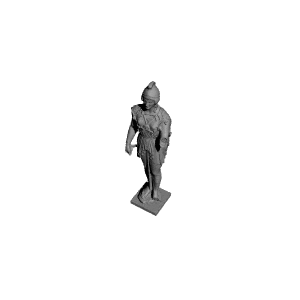