3D
Scan The World
2,800 views 150 downloads
Community Prints Add your picture
Be the first to share a picture of this printed object
0 comments

This sculpture depicts Atropos standing next to the stand with her scissors. Atropos or Aisa in Greek mythology, was one of the three Moirai, goddesses of fate and destiny. Her Roman equivalent was Morta.

Atropos was the oldest of the Three Fates, and was known as the "inflexible" or "inevitable." It was Atropos who chose the mechanism of death and ended the life of mortals by cutting their thread with her "abhorred shears". She worked along with her two sisters, Clotho, who spun the thread, and Lachesis, who measured the length. Atropos has been featured in several stories such as Atalanta and Achilles. 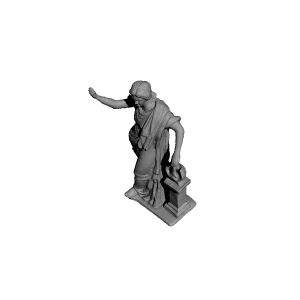