3D
Scan The World
2,490 views 115 downloads
Community Prints Add your picture
Be the first to share a picture of this printed object
0 comments

This is a sculpture of Barama created in Ganga style. The sculpture was discovered in Bangalore district.

Balarama is a Hindu god and the elder brother of Krishna (an avatar of the god Vishnu). He is particularly significant in the Jagannath tradition, as one of the triad deities. He is also known as Baladeva, Balabhadra, Haladhara and Halayudha. The first two epithets refer to his strength, the last two associates him with Hala from his strong associations with farming and farmers, as the deity who used farm equipment as weapons when needed.

While most legends and texts consider Balarama as the avatar of Shesha – the companion of Vishnu, Gitagovinda of Jayadeva describes him as the eighth avatar of Vishnu, raising Krishna to the Brahman, or Ultimate Reality itself, and the fountainhead of all other avatars and creation.

Balarama's significance in the Indian culture has ancient roots. His image in artwork is dated to around the start of the common era, and in coins dated to the 2nd-century BCE. In Jainism, he is known as Baladeva and has been a historically significant farmer-related deity 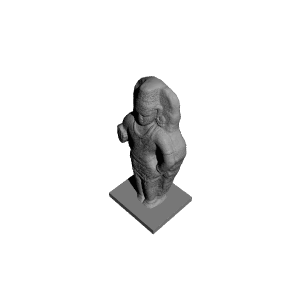