During the third millennium BC in Mesopotamia many sculptures were placed in temples and shrines to represent the presence of an individual before a deity. The best known dedicatory sculptures are those made for Gudea, king of Lagash who ruled around 2150 BC. They depict the king as a faithful worshipper and agent of his god.

Although this statue is not inscribed, the style and workmanship matches other sculptures of Gudea found in the city of Girsu, near Lagash. Inscriptions describe Gudea's prolific temple building and the production of his sculptures, from the first stage of obtaining the stone to the final installation in the temples. Gudea records that he brought stone from Magan, probably modern Oman, as he preferred diorite, a hard dark stone which was more resistant to damage.

Stone from distant lands would have conveyed the impression of success and authority as well as religious piety. A high level of skill was required to work such hard stone and to create sculptures of this size. The reverential pose with hands clasped in front of the body and the garment draped across one shoulder continues the tradition of votive statues of earlier periods in Mesopotamia. 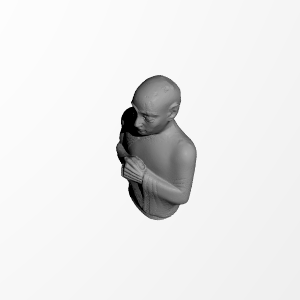