3D
Scan The World
7,336 views 308 downloads
4 collections
Community Prints Add your picture
Be the first to share a picture of this printed object
0 comments

Twenty Second Century B.C. Neo–Sumerian period, southern Mesopotamia. Diorite; H. 17 3/8 in. (44 cm). This sculpture belongs to a series of diorite statues commissioned by Gudea, who devoted his energies to rebuilding the great temples of Lagash and installing statues of himself in them. Many inscribed with his name and divine dedications survive. Here, Gudea is depicted in the seated pose of a ruler before his subjects, his hands folded in a traditional gesture of greeting and prayer. The Sumerian inscription on his robe lists the various temples that he built or renovated in Lagash and names the statue itself, "Gudea, the man who built the temple; may his life be long." 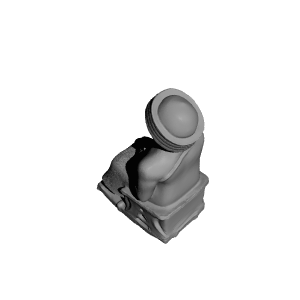 ×
4 collections where you can find Statue of Gudea at MET, New York by ibudmen