In classical mythology, Hermanubis (Greek: Ἑρμανοῦβις) was a god who combined Hermes (Greek mythology) with Anubis (Egyptian mythology). He is the son of Set and Nephthys.

Hermes and Anubis's similar responsibilities (they were both conductors of souls) led to the god Hermanubis. He was popular during the period of Roman domination over Egypt. Depicted as having a human body and jackal head, with the sacred caduceus that belonged to the Greek god Hermes, he represented the Egyptian priesthood, engaged in the investigation of truth.

The divine name Ἑρμανοῦβις is known from a handful of epigraphic and literary sources, mostly of the Roman period. Plutarch cites the name as a designation of Anubis in his underworldly aspect, while Porphyry refers to Hermanubis as σύνθετος "composite" and μιξέλλην "half-Greek".

Although it was not common in traditional Greek religion to combine the names of two gods in this manner, the double determination of Hermanubis has some formal parallels in the earlier period. The most obvious is the god Hermaphroditus, attested from the fourth century BC onwards, but his name implies the paradoxical union of two different gods (Hermes and Aphrodite) rather than an assimilation in the manner of Hermanubis. 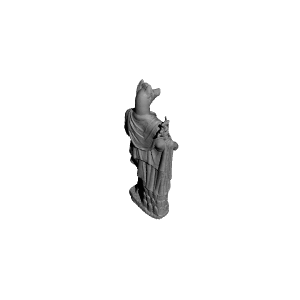 ×
4 collections where you can find Statue of Hermanubis by Threedscans
×
Philippe Maegerman
@PhilippeMaegerman
6
Printed on: Anycubic Photon
Material: Resin
Posted at: 24th June 2018