Statue of Isis or of a priestess of Isis

3D
Scan The World
1,893 views 68 downloads
Community Prints Add your picture
Be the first to share a picture of this printed object
0 comments

Statue of Isis or of a priestess of Isis

The black marble body was completed by a head, arms and legs made of white marble.

Black stone was deliberately chosen for statues of Isis Melanephoros (black-robed Isis) and her priestesses.

The subject of Isis became popular in Greek sculpture when Egypt became a Roman province in the 1st century B.C. From there on, mystery cults mixing Grec-Roman and Egyptian mythology spread across the Roman Empire. Isis was particulary celebrated, and her figure was often associated with Aphordite. That is why statues of Isis may be found in Greece and in Italy. 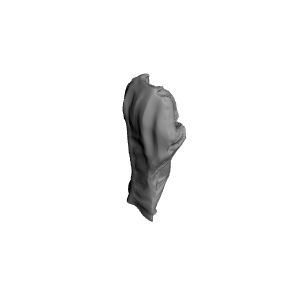