3D
Scan The World
1,742 views 108 downloads
1 collection
Community Prints Add your picture
Be the first to share a picture of this printed object
0 comments

This is a bronze sculpture on stone base with decorative relief depicting John Stuart Mill. John Stuart Mill (20 May 1806 – 8 May 1873), usually cited as J. S. Mill, was a British philosopher, political economist, and civil servant. One of the most influential thinkers in the history of liberalism, he contributed widely to social theory, political theory, and political economy. Dubbed "the most influential English-speaking philosopher of the nineteenth century". Mill's conception of liberty justified the freedom of the individual in opposition to unlimited state and social control. Mill looks as tense and wiry in Woolner's sculpture as he was said to have been in life (see "John Stuart Mill as a Speaker in Parliament — A Contemporary View"), leaning forward with one hand on his knee, the other resting on his book (surely On Liberty). This statue was probably the third of the public monuments to appear on the newly-opened Thames Embankment, following Matthew Noble's sculpture of Sir James Outram in 1871 and Baron Marochetti's of Brunel in 1877 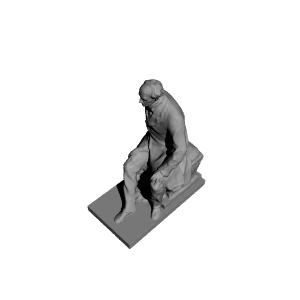