3D
Scan The World
1,653 views 66 downloads
Community Prints Add your picture
Be the first to share a picture of this printed object
0 comments

This sculpture shows Kala Bhairava, an angry manifestation of Shiva, a Hindu deity. He is the supreme ruler of time of this universe and a protector of temples and women (and the timid in general). The representation usually has angry lotus eyes, blazing hair, tiger’s teeth, snake coiled around his neck or crown, and an eerie garland of human skulls. Often terrifying, Kala Bhairava carries a trident, a drum and the severed fifth head of Brahma.

The sculpture was discovered in Begur, Ganga 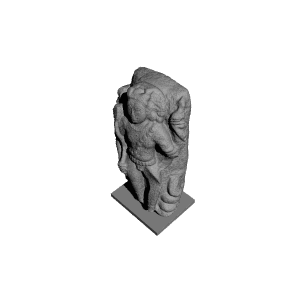