Statue of King Mentuhotep II standing in the Jubilee Garment

3D
Scan The World
4,101 views 161 downloads
1 collection
Community Prints Add your picture
Be the first to share a picture of this printed object
0 comments

Statue of King Mentuhotep II standing in the Jubilee Garment

This statue, which proclaims renewal with its iconography and style, was part of a group that lined the processional path to Mentuhotep II's temple. The rough base was originally sunk into the ground. Mentuhotep II's fists once held the scepter and flail of Egyptian kings and the god Osiris, probably made of metal. The head, wiht the red crown of Lower Egypt, was fond nearby, but may not belong to this particular body. Mentuhotep II wears the traditional short mantle of the pharaoh's thirty-year jubilee, or Sed festival, a feast of rejuvenation. The upright posture and ponderous lower limbs lend the figure an intentionally archaic appearance tha tevokes early Egyptian Art. In reaunifying the country after the collapse of the Old Kingdom, Mentuhotep II replicated the deeds of Egypt's early kings. 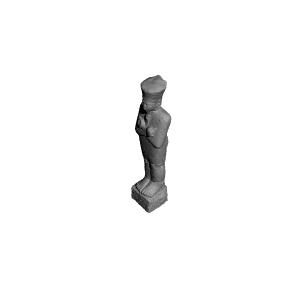