3D
Scan The World
2,095 views 78 downloads
Community Prints Add your picture
Be the first to share a picture of this printed object
0 comments

Lucius Aelius Caesar (January 13, 101 – January 1, 138) became the adopted son and intended successor of Roman Emperor Hadrian (January 24, 76 AD – July 10, 138 AD), but never attained the throne. Aelius was born with the name Lucius Ceionius Commodus, and later called Lucius Aelius Caesar. He is often mistakenly referred to as Lucius Aelius Verus, though this name is not attested outside the Augustan History and probably arose as a manuscript error.

It should be printed big enough, when you clean supports be gentle and careful, especially fingers are really sensitive. Enjoy your print. 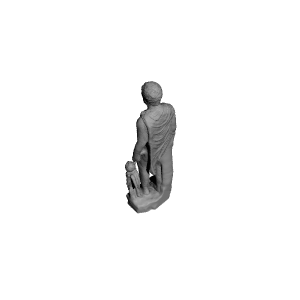 ×
0 collections where you can find Statue of Lucius Aelius Caesar at The State Hermitage Museum, St Petersburg by Scan The World