Statue of Melpomene at The State Hermitage Museum, St Petersburg

3D
Scan The World
2,316 views 164 downloads
Community Prints Add your picture
Be the first to share a picture of this printed object
0 comments

Statue of Melpomene at The State Hermitage Museum, St Petersburg

Melpomene ("to sing" or "the one that is melodious"), initially the Muse of Singing, she then became the Muse of Tragedy, for which she is best known now. Her name was derived from the Greek verb melpô or melpomai meaning "to celebrate with dance and song." She is often represented with a tragic mask and wearing the cothurnus, boots traditionally worn by tragic actors. Often, she also holds a knife or club in one hand and the tragic mask in the other.

In Roman and Greek poetry, it was traditional to invoke the goddess Melpomene so that one might create beautiful lyrical phrases (see Horace's Odes). 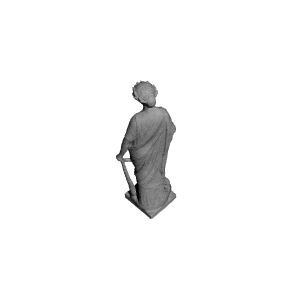 ×
0 collections where you can find Statue of Melpomene at The State Hermitage Museum, St Petersburg by Scan The World