Statue of Napirasu at the Louvre museum, Paris

3D
Scan The World
3,129 views 107 downloads
1 collection
Community Prints Add your picture
Be the first to share a picture of this printed object
0 comments

Statue of Napirasu at the Louvre museum, Paris

Queen Napirasu, Untash-Napirisha's wife, is shown standing. The figure is life-size, but the head and the left arm are damaged. She is wearing a short-sleeved gown covered in the sort of embroidery usually found on such garments. She has four bracelets on her right wrist and a ring on her left ring finger. Although her hands are crossed on her stomach, she is not in the pose usually associated with worship. The inscription on the front of the skirt is in Elamite, reflecting the kingdom's linguistic identity. This inscription gives the queen's name and titles, invokes the protection of the gods, describes the ritual offerings made to them, and calls down their curse on anyone bold enough to desecrate her likeness. The statue is placed under the protection of the god Beltiya and three deities associated with the Igihalkid Dynasty - the god Inshushinak, the god Napirisha, and his consort Kiririsha. These three deities are also depicted on the stele of Untash-Napirisha, also in the Louvre 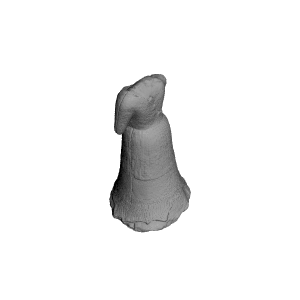 ×
1 collections where you can find Statue of Napirasu at the Louvre museum, Paris by Scan The World