3D
360°
Scan The World
3,608 views 422 downloads
6 collections
Community Prints Add your picture
Be the first to share a picture of this printed object
0 comments

Osiris, god of the dead, stands mummiform, arms folded right over left, with wedge-formed feet. Head and hands emerge from a shroud so smoothly contoured to the shape of the body that details such as arms, elbows, and kneecaps emerge from the plain undifferentiated surface as islands of relief, while the crook and flail appear less as accessories than as organic outgrowths of the underlying form. The base and back pillar are inscribed with mortuary texts on behalf of the “king’s acquaintance” Ptahirdis, whose father’s name was Wepwawetem-saf and whose mother’s name was Merptahites.

The statue has the oldest modern history in the Egyptian collection. The upper part (from the knees up) was excavated in 1928 by the Harvard University-Museum of Fine Arts Expedition in the shaft of Giza tomb 7792, east of the Great Pyramid. The lower part (base and ankles) was discovered 130 years earlier. It was brought to France by General Jean Lannes (later marshal of France and duke of Montebello), one of Napoleon’s most valiant officers, who participated in the short-lived but epoch-making Egyptian Campaign of 1798–1801, the beginning of the modern science of Egyptology.

General Lannes by all reports was no antiquarian. The feet of Osiris passed down in his family for six generations until 1999, when Egyptologist Olivier Perdu, visiting French country house collections of antiquities, recognized it as belonging to the MFA fragment. Although it does not directly join (approximately 8 centimeters [3 inches] in the middle are restored), its size, shape, material, and above all the identical names and titles of the personages mentioned in the inscriptions leave no doubt that it belongs. Through the generosity of a friend the lower part was purchased by the Museum, and the two fragments, sundered in antiquity, are now one. The result is both a masterpiece of Late Period sculpture and a historical link with the founding moment of modern Egyptology.
Provenance
From Giza, Eastern Cemetery, Pit G 7792 A, filling. April, 1928: excavated by the Harvard University-Museum of Fine Arts Expedition; 1929: assigned to the MFA by the government of Egypt. (Accession date: April 1, 1928.) 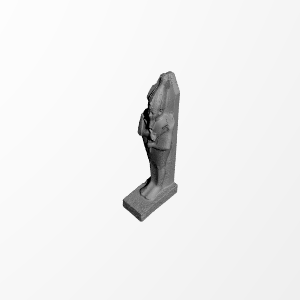