3D
Scan The World
2,195 views 94 downloads
Community Prints Add your picture
Be the first to share a picture of this printed object
0 comments

This is a sculpture depicting Parashurama, the sixth avatar of Vishnu in Hinduism. Born as a brahmin, Parshuram carried traits of a Kshatriya and is often regarded as a Brahmin-Kshatriya. He carried a number of Kshatriya traits, which included aggression, warfare and valour. Like other incarnations of Vishnu, he was foretold to appear at a time when overwhelming evil prevailed on earth. The Kshatriyas class, with weapons and power, had begun to abuse their power, take what belonged to others by force and tyrannize people. Parashurama corrects the cosmic equilibrium by destroying these evil Kshatriya warriors 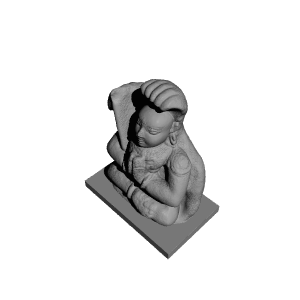