Statue of Poseidon with Delphin

3D
Scan The World
3,605 views 300 downloads
1 collection
Community Prints Add your picture
Be the first to share a picture of this printed object
0 comments

Statue of Poseidon with Delphin

This sculpture of a man with the dolphin twined around holding a partly preserved pole (probably a trident) in his right hand. Most likely the sculpture depicts Poseidon and Delphin.

Poseidon was the Olympian god of the sea, earthquakes, floods, drought and horses.
He was normally depicted as a mature man with a sturdy build and dark beard holding a trident (a three-pronged fisherman's spear). Delphin was a dolphin-shaped sea daemon in the service of the god Poseidon. When his master was wooing the Nereid Amphitrite and she fled, Delphin was sent to find the nymphs and persuade her to agree to the marriage. For his service, Poseidon placed the dolphin amongst the stars as the constellation Delphinus. 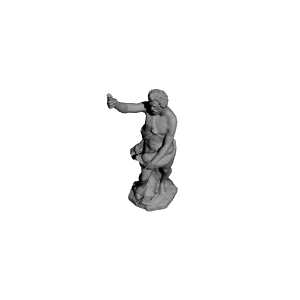