3D
Featured Scan The World
3,900 views 132 downloads
2 collections
Community Prints Add your picture
Be the first to share a picture of this printed object
0 comments

The Sanctuary of Demeter and Kore in Priene is situated on a terrace overlooking the city. Women generally held the priesthood for the cult of the earth and fertility goddesses and statues were frequently erected in their honour. The statue of Nikeso stood near the entrance to the sanctuary. The inscription on the base describes the priestess as ‘Nikeso, daughter of Hipposthenes, wife of Eukritos, priestess of Demeter and Kore.’

The statue must have fallen from its plinth and the head and right arm have not survived. The taut lines of drapery under the armpit and the position of the dowel that once attached the right arm to the body suggest it was raised up to support a water container the woman balanced on her head. Terracotta figurines of cult servants depicting the same motif were found as votive offerings in the sanctuary. Nikeso is portrayed in her priestly role, and it is possible that she commissioned the statue herself ‘in memory of her service to the temple’ (see C. Eule). Her outward appearance also bears resemblance to Kore, the daughter of Demeter. Similar to statues of the youthful goddess, her mantle is wrapped around the body and the upper edge runs diagonally across the chest, leaving the right arm bare. Her hair is loosely fastened at the neck and falls freely down her back with long curls either side of her breast. It would have been an unusual hairstyle for a bourgeois woman of the time but fitted the image of a goddess.

At first glance, the statue seems simple. The body is encircled by the finely ribbed mantle in a double layer, which makes the material seem very thick, with strong diagonal folds of drapery across the back, abdomen and chest. The mantle ends in swathes of material that are thrown over the left shoulder, completely covering the left arm. The material forms a broad overfold around the breast, the lower edge of which runs horizontally as far as the upper left arm. A succession of finely pleated layers of fabric can be seen along the upper arm. They gather over the left hand, which grasps the cascades of fabric from the inside, and fall in deep, curved folds behind the arm. The texture of artfully draped material is reinforced by the sharp contrast between the ribbed fabric of the mantle and the finely pleated chiton of soft, light material that falls to her feet.

As a counterpoint to the mantle with its diagonally cut fold lines covering the frame of the body, volume and movement are indicated in places – the round breasts, the abdomen, the knee of the leg turned to one side and the curved left hip as well as the distinct twist and elevation of the right shoulder caused by the raised arm. The movement of the statue towards the right must have been emphasised by the head, which also turned to the right. The expressiveness and use of contrapposto that distinguishes statues of the high Hellenistic period is already evident here. 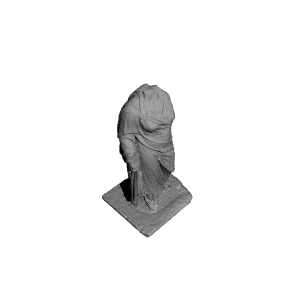