3D
Scan The World
1,673 views 138 downloads
Community Prints Add your picture
Be the first to share a picture of this printed object
0 comments

This is a memorial statue of Robert Burns (25 January 1759 – 21 July 1796), also known as Rabbie Burns, the Bard of Ayrshire, Ploughman Poet and various other names and epithets,  a Scottish poet and lyricist. He is widely regarded as the national poet of Scotland and is celebrated worldwide. He is the best known of the poets who have written in the Scots language, although much of his writing is also in English and a light Scots dialect, accessible to an audience beyond Scotland. He also wrote in standard English, and in these writings, his political or civil commentary is often at its bluntest.

He is regarded as a pioneer of the Romantic movement, and after his death, he became a great source of inspiration to the founders of both liberalism and socialism, and a cultural icon in Scotland and among the Scottish diaspora around the world. The celebration of his life and work became almost a national charismatic cult during the 19th and 20th centuries, and his influence has long been strong on Scottish literature. In 2009 he was chosen as the greatest Scot by the Scottish public in a vote run by Scottish television channel STV.

As well as making original compositions, Burns also collected folk songs from across Scotland, often revising or adapting them. His poem (and song) "Auld Lang Syne" is often sung at Hogmanay (the last day of the year), and "Scots Wha Hae" served for a long time as an unofficial national anthem of the country. Other poems and songs of Burns that remain well known across the world today include "A Red, Red Rose", "A Man's a Man for A' That", "To a Louse", "To a Mouse", "The Battle of Sherramuir", "Tam o' Shanter" and "Ae Fond Kiss".

There are few inscriptions on the memorial and its base:

{On the front of the plinth:}
"The poetic genius of my country found me at the
plough - and threw her inspiring mantle over me she
bade me sing the loves, the joys, the rural scenes and
rural pleasures of my native soil in my native tongue:
I tuned my wild, artless notes as she inspired."

{On the paper at his feet at the left:}
"O sweet to stray, and pensive ponder a heartfelt sang." 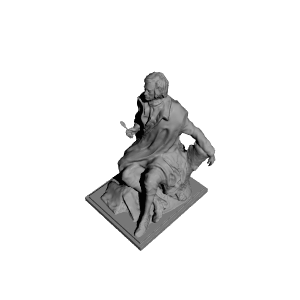