3D
Scan The World
2,395 views 200 downloads
1 collection
Community Prints Add your picture
Be the first to share a picture of this printed object
0 comments

Seti I, second king of Dynasty 19, was, like his father Ramesses I, very conscious of his role in establishing a new dynasty and restoring the power and stature of Egypt among its neighbors. He campaigned in the Levant and his battle reliefs decorate the exterior walls of the huge hypostyle hall that he added to the temple of Karnak. He also reopened the gold mines in the eastern desert and Nubia. He built a beautiful mortuary temple for himself at Abydos in which was carved the famous kinglist of Abydos, as well as a mortuary temple at Thebes. In the Valley of the Kings, he built one of the most beautifully carved and decorated tombs ever made there.
This kneeling statue of the king shows him making offerings to Osiris and was probably intended for his temple at Abydos. The same high artistic standards that are seen in the reliefs of Seti I are evident in this statue and the face seems to be reminiscent of earlier kings of Dynasty 18 such as Thutmose III. 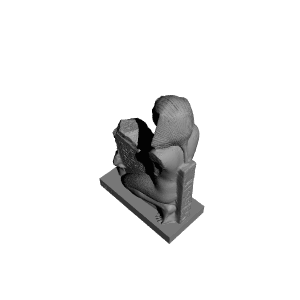