Statue of the Governor of Tura-Dagan

3D
Scan The World
1,507 views 28 downloads
Community Prints Add your picture
Be the first to share a picture of this printed object
0 comments

Statue of the Governor of Tura-Dagan

Mesopotamian art survives in a number of forms: cylinder seals, relatively small figures in the round, and reliefs of various sizes, including cheap plaques of moulded pottery for the home, some religious and some apparently not. Favourite subjects include deities, alone or with worshippers, and animals in several types of scenes: repeated in rows, single, fighting each other or a human, confronted animals by themselves or flanking a human or god in the Master of Animals motif, or a Tree of Life.

Stone stelae, votive offerings, or ones probably commemorating victories and showing feasts, are also found from temples, which unlike more official ones lack inscriptions that would explain them; the fragmentary Stele of the Vultures is an early example of the inscribed type, and the Assyrian Black Obelisk of Shalmaneser III a large and well preserved late one. 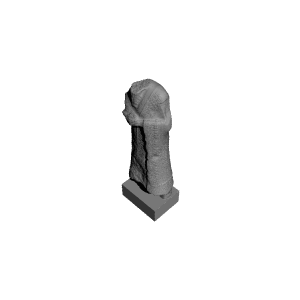