Statuette of the Virgin and the Child

3D
Scan The World
1,377 views 73 downloads
Community Prints Add your picture
Be the first to share a picture of this printed object
0 comments

Statuette of the Virgin and the Child

This statuette depicts the Virgin standing behind the Child and holding his hands to support him standing steady. Mary is depicted wearing her robe, while the infant Jesus has a halo around his head.

The little plate on the sculpture says "In the memory of Lorimer Rees Chaplain".

H. L. O. Rees (Lorimer Rees) d. Lorimer Rees received his degree from Magdalen College in 1929 and was ordained in 1930 in the diocese of London. He was an assistant curate in St. Mary's Somerstown in NW London and was also a missioner at Magdalen College mission. He spent 7 years working in a poor district of London, which was characterized by bad housing and poverty. He had the reputation of being a 'sympathetic and capable clergyman'. His induction to St. Peter's was on the 27th of February 1938. 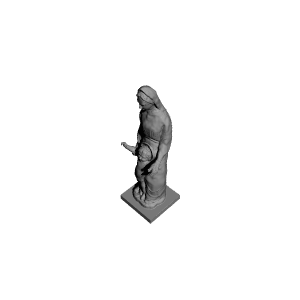