3D
Scan The World
2,397 views 123 downloads
1 collection
Community Prints Add your picture
Be the first to share a picture of this printed object
0 comments

Although it is called a "Stela", in reality, it is a square panel that might have been integrated into the architecture. This type of monuments have not been recovered in its original context but everything seems to indicate that it was part of the architecture, maybe as a component in a narrative scene formed by various panels. At least a similar monument is known. The relief was very well carved and its features are representative of the Late Pre-classic Maya. The main character is anthropomorphic with animal features, jaguar paws instead of feet and the face is a representation of the long-nosed characters well spread throughout the Maya area during this period, those features are considered Pan-Mesoamerican. The character is kneeling and with his hands is holding a stylized snake above his head. The scene shows movement and could represent certain ritual. The snake may be interpreted as the celestial vault, in which case this character will be one of the earliest representation of the carriers of the World. 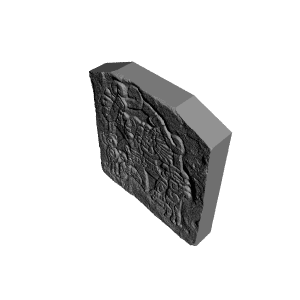