The stele of Baal with Thunderbolt at The Louvre, Paris

3D
Support Free Scan The World
6,479 views 274 downloads
Community Prints Add your picture
Be the first to share a picture of this printed object
0 comments

The stele of Baal with Thunderbolt at The Louvre, Paris

The decoration of this arched stela shows the great storm god Baal brandishing a club and thrusting a spear sprouting vegetation into the ground. A smaller figure, probably the king of Ugarit, appears to be under the protection of the god. This stela, the most important of those discovered at Ugarit, testifies to the widespread production of stelae in the Near East, where they emerged as a major medium of artistic expression during the Late Bronze Age.

The large stela in the Louvre bears the relief carving of a monumental male figure in action, towering over a much smaller figure standing on a pedestal. The horned headdress worn by the main figure indicates that he is a god. He is facing right, his right arm raised above his head and brandishing a club, the other arm outstretched and carrying a spear, the head of which is stuck in the ground, while vegetation sprouts out of its shaft. The god is wearing a beard, and two long coils of hair fall below his shoulders. At the waist of his short loincloth, which is decorated with stripes, hangs a dagger, the tip of which seems to be touching the head of the small figure. The latter is wearing a long robe trimmed with braid, which hides his arms. His small round head is bare. The pedestal on which he stands is a horned altar, smaller and less ornate than the one upon which the main figure stands: this altar consists of two rectangular tiers with protruding corners, each decorated with a flowing double line of unequal thickness.

Today it is generally agreed that this scene depicts the god Baal unleashing a storm from the club he is brandishing in the traditional pose of the storm gods worshipped throughout the Levant - the Greek god Zeus and the Roman god Jupiter would later take up the same pose and attributes. The beautiful visual metaphor of the spear transformed into a plant is an allusion to the beneficial effects of the rain produced by storms. The small figure crouching between the god and his spear is generally thought to be the king of Ugarit, in ceremonial dress, his arms crossed in prayer and the recipient of divine protection. Like the god, has he been shown placed on an altar as an allusion to his role as officiant in ceremonies? The motifs carved on the two-tiered altar on which the god stands are more difficult to interpret: is the monstrous snake who will cause the death of Baal depicted above the carved waves of the ocean? Or is it the horizon of mountains that surrounded the kingdom of Ugarit, protected by Baal, whose home is "in the innermost reaches of Mount Sapon."

The stela depicting the storm god Baal is the largest and the most significant of the stelae discovered at Ras Shamra. It was found, along with eight others, not far from the temple to which it gave its name: four were discovered near the Temple of Dagon and another ten in various locations around the city. Usually broader towards the bottom, the stelae were topped with an arch or a pyramid, and had either a lower part which was sunk into the ground, or a wide base forming a set of steps. Comparison with stelae excavated on other Bronze Age Syrian-Palestinian sites, such as Byblos, Gezer, or Hazor, indicates that the stela was a major form of religious expression in the Levant. It could have a niche carved into it, as at Byblos, be decorated with astral motifs, or, as is the case with the most outstanding examples, depict a ritual scene or a deity.

This print is made on MakerBot Replicator Fifth Generation. The dimension of the model 55mm x 30mm x 130mm, Infill 10%, with support and layer high 0,2. Provides very nice results! 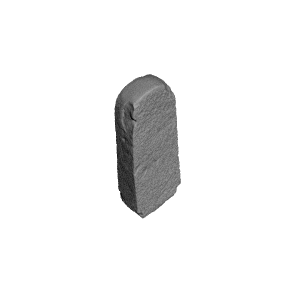 ×
0 collections where you can find The stele of Baal with Thunderbolt at The Louvre, Paris by Scan The World