3D
360°
Featured Scan The World
2,694 views 127 downloads
3 collections
Community Prints Add your picture
Be the first to share a picture of this printed object
0 comments

Relief sculpture fragment from a round-topped stela showing the god Ptah and a cobra goddess, perhaps Renenutet. The carving is in raised relief except for the inscription, which is incised. The mummiform figure of Ptah is accompanied by the hieroglyphic caption "Ptah south of his wall," a reference to a shrine of that god at Memphis. In front of Ptah is a fragmentary image of another deity, a crowned cobra surmounting a papyrus stalk. Although the decoration suggests a connection with Memphis, stelae honoring the gods of Memphis can also be found in the Theban area. 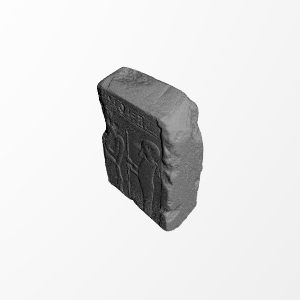 ×
3 collections where you can find Stela fragment by mhcartmuseum