3D
Scan The World
3,191 views 222 downloads
3 collections
Community Prints Add your picture
Be the first to share a picture of this printed object
0 comments

The stele of San Miguel Chapultepec, Veracruz maintains the same features that are found in some of the stela of Cerro de las Mesas, especially number five. Some of them have dates with numerals of bar and point, a system used in Estela C of Tres Zapotes, and also present in the Mayan culture.

The character depicted is a walking priest; he wears a rich headdress on his head formed by three animal faces, the mouth has a mask that can be seen as anectodal to the Quetzalcoatl-Egectl. The skirt is decorated with a flower in the centre and topped, at the bottom, by a head of a tiger and several branches with leaves. The water behind him, both sea and rain, is represented by descendant lines.

In front of the characters of this stele and that of the Cerro de las Mesas, there used to be a column that bears glyphs and numerals, in which we can see the glyphs because the numerals had to be reflected in the lower part that has been lost. 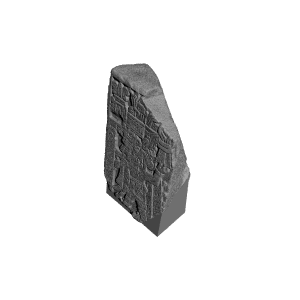