Stele of the protective goddess Lama

Stele of the protective goddess Lama

This stele is carved with a goddess, identifiable by her horned headdress, facing to her left with arms upraised. She wears her hair pulled back with a lock over her shoulder, and her five-tiered skirt is decorated with 17 lines of cuneiform writing.

The "interceding goddess" with arms raised in a gesture of prayer is well-known in earlier Mesopotamian art. where she is shown as an intermediary between a human (usually the king) and a high-ranking god or goddess. Here, she is identified by the inscription as the protective goddess Lama. The stele was dedicated to the goddess Inanna "for the life of" the Kassite king Nazi-Maruttash. Written in Sumerian, an ancient language which had ceased to be spoken centuries earlier, the inscription also places a curse on anyone who would tamper with the stele or remove it from view.

This stele was one of a pair that are thought to have been erected in the sacred precinct called Eanna, "House of Heaven," at Uruk, where Inanna was worshipped. Its counterpart, now in the Iraq Museum, Baghdad, faces in the opposite direction and is carved with the same inscription. The Eanna precinct had been the site of worship for nearly two millennia when it was renovated during the Kassite period. These stelae may have intentionally drawn upon the archaic image of the protective goddess, which had mostly fallen out of use after the Old Babylonian period, together with the inscription in a long-dead language to increase their effectiveness at the ancient temple. 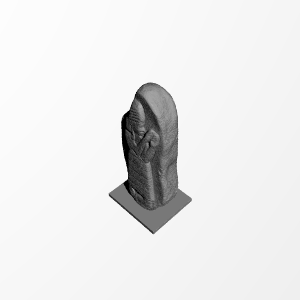