This monument has been scanned through photogrammetry with the use of a drone, 181 pictures were taken to realise this model.

The monument was made by the sculptor Iftimie Bârleanu and placed in 1977 in Șipote-Cetate Park, near the Suceava Fortress. The monument praises the personality of the voivode Stephen the Great (1457-1504).

The monument was unveiled on September 16, 1977, in the presence of the RSR president, Nicolae Ceaușescu, who was visiting Suceava. Upon his arrival in the city, Ceausescu was greeted, according to the journalists of the time, by "hundreds of halberdiers, squires and archers, dressed in specific national costumes", who greeted the soldiers, according to the custom inherited from the time of Stephen the Great. Great. ” The unveiling of the statue was done with a military ceremony, the singing of the state anthem and the offering of bouquets of flowers to the communist leaders at the event.

The monument is made of cast bronze and depicts the voivode on horseback. It is 8 meters high, 8 meters long and 2 meters wide.

The base of the statue is made of travertine and was made by the sculptor Vladimir Florea. It is 15 meters high, 6 meters long and 2.10 meters wide. On the side walls of the base, in the lower register, are placed two other large bronze reliefs. Another relief depicts a battle sequence, and the other a scene from the Royal Court. On the front wall, in the upper half, the base is decorated with the coat of arms of Moldova, also made of bronze.

The words of President Nicolae Ceaușescu, in bronze letters, were placed on the pedestal of the statue: at the basis of Romania's creation ”. On the side of the pedestal was placed a marble plaque on which was written in gold letters: “Unveiled today, September 16, 1977, in the presence of comrade. Nicolae Ceaușescu, Secretary General of the PCR, President of the RSR ”. After the December 1989 Revolution, these inscriptions were removed from the pedestal. On the back of the pedestal is the inscription: "Made by sculptor Vladimir Florea 1977". 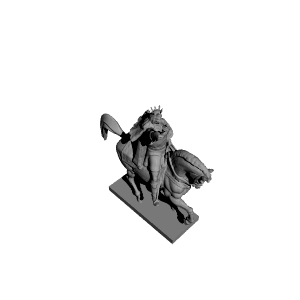