Stone Figure of Xiuhcoatl at The British Museum, London

3D
Scan The World
7,955 views 757 downloads
9 collections
Community Prints Add your picture
Be the first to share a picture of this printed object
0 comments

Stone Figure of Xiuhcoatl at The British Museum, London

The serpent played an important role in Mexica religion. Many superb stone sculptures have survived, the majority of them representing rattlesnakes carved with striking realism and great skill. This magnificent sculpture has a blend of both realistic and mythical creatures. It exhibits all the elements characteristic of Xiuhcoatl, the Fire Serpent, with the head of a serpent, short legs finishing in claws and a curved snout. The end of the figure's tail is formed by the conventional Mexican year symbol (xihuitl): a triangle, like the solar ray sign, and two entwined trapezes.

The Fire Serpent is commonly represented in Mexica art in a variety of media, including codices (screenfold books). It is used for example, as a back ornament for Xiuhtecuhtli, the fire god, and Huitzilopochtli, the Mexica patron god.

This piece was probably used to decorate a building. According to Guillermo Dupaix, a collector of Mexican antiquities, it came from Texcoco, a city on the east side of the lake on which the Mexica capital, Tenochtitlan, was founded. William Bullock, also a famous collector, acquired it in 1823 during his trip to Mexico and exhibited in London, at the Egyptian Hall in Piccadilly. 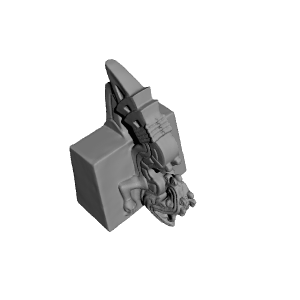 ×
9 collections where you can find Stone Figure of Xiuhcoatl at The British Museum, London by Scan The World