This stone lion may look a little different from those on the African savannah or any other kind we can possibly imagine. Why?

The lion is not a species originated from China. The image of the lion began in the Han Dynasty. It is said that the lion was passed from the Western Region (largely the current West Asia). According to legend, at the time of the East Han Dynasty Emperor Hanzhang (AD 75 - 88), the Western Region country Da Yue Zhi sent a golden lion as a tribute to the Chinese Emperor. Later, with the introduction of Buddhism, the lion became a kind of spiritual beast that was given the power from the heaven. In Chinese culture, the lion is more of a mythical animal than an animal in real life. A reputable Buddhist monk Hui Lin from the Tang Dynasty once said: “The lion is out of the Western Region.”

Therefore, back to the question at the beginning, one mostly believed answer is that lions from the Western Region looked different from normal ones; while some Buddhist believers have also pointed that the shape of the hair of the lion is very similar to that of the Buddha, which can also make sense since it became a powerful animal of Buddhism.

Nowadays, these mythical lions are spread out in hutongs of central Beijing. This is a replica of a lion in a beautiful hutong called Nan Luogu Xiang (means the South Gong and Drum Alley). 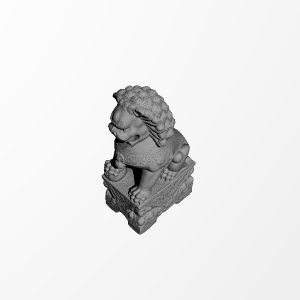 ×
50 collections where you can find Stone Lion by STW-China
×
Trevor L
@trevorl1
3
Printed on: Wanhao Duplicator i3 PLUS
Posted at: 16th May 2020

Thanks for this model. Marble PLA.