3D
Scan The World
2,283 views 138 downloads
Community Prints Add your picture
Be the first to share a picture of this printed object
0 comments

This is a funerary attribute of King Senkamaniske,  a Kushite King who ruled from 640 to 620 BC at Napata. He used royal titles based on those of the ancient Egyptian pharaohs

Shabtis are small figures of adult male or female form inscribed with a special formula to be recited (Shabti formula), or figures representing the function expressed in that spell, namely, to carry out heavy manual tasks on behalf of a person in the afterlife. 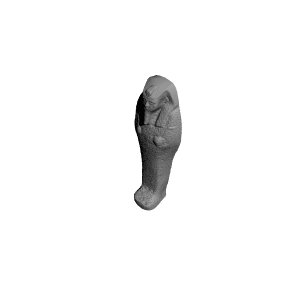