3D
Scan The World
2,517 views 106 downloads
1 collection
Community Prints Add your picture
Be the first to share a picture of this printed object
0 comments

The scenes carved on the four sides of this vessel depict two protagonists engaged in a formal contest over a severed trophy head with a tassled plume of long hair. The left hand figure always wear a distinctive nose ornament that extends across his cheek, while the fanged jaws of his opponent emphasise his supernatural powers. The ritual sequence can be 'read' beginning with the panel on the left side and following the direction which the trophy head is facing. The confrontation is played out in a series of arm gestured which are the mirror image of each other, and change in synchronised fashion from panel to panel. Subtle variations in the costume and headdress of each figure reveal a series of complementary oppositions that echo and elaborate upon the visual language of the arm gestures. On the back panel the sequence culminates in a gesture of mutual recognition and presentation. It seems likely that the vessel held a liquid, perhaps the fermented maguey beverage 'pulque'. The object may have served a ritual function in a round of ceremonies celebrated at certain times of the year. 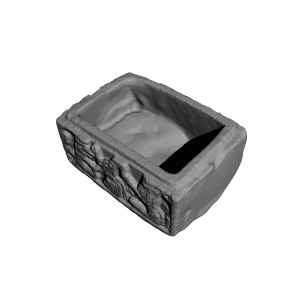 ×
1 collections where you can find Stone Vessel at the British Museum, London by Scan The World