3D
Featured Scan The World
4,113 views 140 downloads
Community Prints Add your picture
Be the first to share a picture of this printed object
0 comments

From the Rodin Museum in Paris, scanned with photogrammetry using Sony A6000, and Recap software

Discription and citation from http://www.musee-rodin.fr/en/collections/sculptures/monument-james-mcneill-whistler

Cast made by Fonderie de Coubertin in 1986 for the museum collections.
During the Whistler exhibition inaugural dinner held in London, in 1905, it was decided to erect a monument to the painter James McNeill Whistler (1834-1903). The commission went to Rodin, who, in 1903, had been unanimously elected president of the International Society of Painters, Sculptors and Gravers, the association founded by Whistler in 1897. Rodin decided to pay tribute to the painter’s genius, not through a conventional portrait, an effigy or historical scene, but through an allegorical figure, a “Muse climbing the mountain of fame”, the model for which was Gwen John, a young Welsh painter.

This design, which paved the way for a whole new concept of the public monument, resulted in a large-scale, armless,nude figure, exhibited at the Salon, where it was criticized for its unfinished appearance.The sculpture should have been reworked, but on Rodin’s death, the monument was still not complete.

Printed scaled to 50mm on z-axis, with .18 layer height and supports 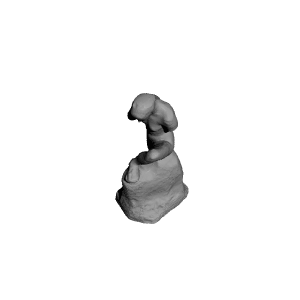 ×
0 collections where you can find Study for the Naked Muse, without Arms by KC2OLB