The Story of Russell the Aircraft Pilot:

Awaking at the sound of his alarm, Russell sprang out of bed! Rushing to where his calender hung on the wall Russell realized that today was the day of the BuddyLand Games, and he had forgotten allout ab it! Stumbling into his racing uniform, Russell opened his front door and huried to his aircraft. Programing in the comand to blast off, the rear booster failed to ignite and Russell had no choice but to remove the paneling and observe what was wrong. Peering into the dark cylinder of the booster engine, russle noticed right away that the main booster line had come undone. looking down at his watch, he noticed that there was only one hour before the race started. Russel ran into his garage and looked around franticallly for extra booster parts, but he couldn't find any. Suddenly out of the corner of his eye he noticed something. Sitting under a black cover in the corner of his garage was a small reflection of metal. Uncovering the object, Russell was shocked at what he saw. It was his great grandfathers old 3d printer that had been passed down through his family for many generations. Slowy lifting the printer up, he set it on top of his work bench. He new at last that the day had been saved and he could print the correct part for the broken booster. After pressing many buttons and flipping many switches the machine roared to life and was ready to go. With a large smile on his face Russell plugged the file into the printer and pressed the large green "GO" button. Away the prnter went, printing at unbelivable speeds. As soon as the part was finnished he gleamed at its beauty. Quickly snapping out of his trance he grabbed the part and hooked it up to the booster. smiling from ear to ear, Russell climbed back up into the cockpit and blasted off. 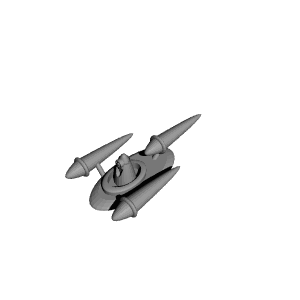