3D
Scan The World
2,698 views 112 downloads
Community Prints Add your picture
Be the first to share a picture of this printed object
0 comments

In March 1919, the Moscow Workers and Red Army Representatives Council Presidium passed their decision to rename the Theatre Square into the Sverdlov Square, and to erect a monument there. On November 26th 1969, Moscow Council's Executing Committee approved of the monument in draft, created by sculptor R.Ye. Ambartsumyan, and architect B.I. Tkhor. In March 1997, the plaster model was submitted for bronze casting to the Monument Sculpture plant in Leningrad. The monument was unveiled on October 31st, 1978. By the decree of the Moscow City Council of People Representatives of October 24th 1991, the monument was placed inthe MUSEON Arts Park exposition.

This work is historically and culturally significant, being the memorial construction of the soviet era, on the themes of politics and ideology. 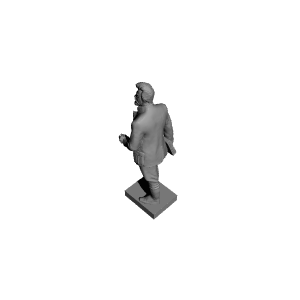 ×
0 collections where you can find Sverdlov Yakov Mikhaylovich at MUSEON, Moscow by Scan The World