3D
Scan The World
4,099 views 184 downloads
Community Prints Add your picture
Be the first to share a picture of this printed object
0 comments

Albert Szent-Györgyi de Nagyrápolt (September 16, 1893 – October 22, 1986) was a Hungarian physiologist who won the Nobel Prize in Physiology or Medicine in 1937. He is credited with discovering vitamin C and the components and reactions of the citric acid cycle. He was also active in the Hungarian Resistance during World War II and entered Hungarian politics after the war.

Szent-Györgyi began his studies at the Semmelweis University in 1911 before starting his research in his uncle's anatomy lab. His studies were interrupted in 1914 to serve as an army medic in World War I. In 1916, disgusted with the war, Szent-Györgyi shot himself in the arm, claimed to be wounded from enemy fire, and was sent home on medical leave. He was then able to finish his medical education and received his MD in 1917. He married Kornélia Demény, the daughter of the Hungarian Postmaster General that same year.

After the war, Szent-Györgyi began his research career in Bratislava. He switched universities several times over the next few years, finally ending up at the University of Groningen, where his work focused on thechemistry of cellular respiration. This work landed him a position as aRockefeller Foundation fellow at Cambridge University. He received his PhD from Fitzwilliam College, Cambridge in 1927 for work on isolating anorganic acid, which he then called "hexuronic acid", from adrenal gland tissue.

He accepted a position at the University of Szeged in 1930. There, Szent-Györgyi and his research fellow Joseph Svirbely found that "hexuronic acid" was actually the thus far unidentified antiscorbutic factor, known as vitamin C. After Walter Norman Haworth had determined the structure of vitamin C, and in honour of its antiscorbutic properties, it was given the formal chemical name of L-ascorbic acid. In some experiments they used paprika as the source for their vitamin C. Also during this time, Szent-Györgyi continued his work on cellular respiration, identifying fumaric acid and other steps in what would become known as the Krebs cycle. In Szeged he also met Zoltán Bay, physicist, who became his personal friend and partner in research on matters of bio-physics.

In 1937, he received the Nobel Prize in Physiology or Medicine "for his discoveries in connection with the biological combustion process with special reference to vitamin C and the catalysis of fumaric acid". Albert Szent-Györgyi offered all of his Nobel prize money to Finland in 1940. (The Hungarian Volunteers in the Winter Wartravelled to fight for the Finns after the Soviet invasion of Finland in 1939.)

In 1938, he began work on the biophysics of muscle movement. He found that muscles contain actin, which when combined with the protein myosin and the energy source ATP, contract muscle fibers.

In 1947, Szent-Györgyi established the Institute for Muscle Research at the Marine Biological Laboratory in Woods Hole, Massachusetts with financial support from Hungarian businessman Stephen Rath. However, Szent-Györgyi still faced funding difficulties for several years, due to his foreign status and former association with the government of a Communist nation. In 1948, he received a research position with the National Institutes of Health (NIH) in Bethesda, Maryland and began dividing his time between there and Woods Hole. In 1950, grants from the Armour Meat Company and the American Heart Association allowed him to establish the Institute for Muscle Research.

During the 1950s, Szent-Györgyi began using electron microscopes to study muscles at the subunit level. He received the Lasker Award in 1954. In 1955, he became a naturalized citizen of the United States. He became a member of the National Academy of Sciences in 1956.

In the late 1950s, Szent-Györgyi developed a research interest in cancer and developed ideas on applying the theories of quantum mechanics to the biochemistry (quantum biology) of cancer. The death of Rath, who had acted as the financial administrator of the Institute for Muscle Research, left Szent-Györgyi in a financial mess. Szent-Györgyi refused to submit government grants which required him to provide minute details on exactly how he intended to spend the research dollars and what he expected to find. After Szent-Györgyi commented on his financial hardships in a 1971 newspaper interview, attorney Franklin Salisbury contacted him and later helped him establish a private nonprofit organization, the National Foundation for Cancer Research. Late in life, Szent-Györgyi began to pursue free radicals as a potential cause of cancer. He came to see cancer as being ultimately an electronic problem at the molecular level. In 1974, reflecting his interests in quantum physics, he proposed the term "syntropy" replace the term "negentropy".[10] Ralph Moss, a protégé of his in the years he performed his cancer research, wrote a biography entitled: "Free Radical: Albert Szent-Gyorgyi and the Battle over Vitamin C", ISBN 0-913729-78-7, (1988), Paragon House Publishers, New York. Aspects of this work are an important precursor to what is now dubbed redox signaling. 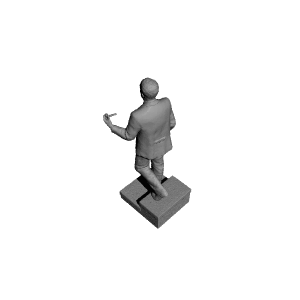 ×
0 collections where you can find Albert Szent-Györgyi in Szeged, Hungary by Scan The World