3D
1,185 views 152 downloads
8 collections
Community Prints Add your picture
Be the first to share a picture of this printed object
0 comments

The T-25 was a popular light shuttle and dropship used in the outer rim for an impressive span of time. Well liked by pilots for its high thrust and maneuverability in atmosphere and deep space, the T-25 saw employment in its main role and a number of purposes it was never intended for. Starlancers were not true starfighters, but they were no worse than a bomber in a dogfight and had a chance of defending themselves in a fight, especially if well handled.

T-25s served as light shuttlecraft and combat dropships, but their external ordnance racks - originally intended to extend their modest range - were sometimes adapted to a ground attack role as they could carry gun or missile pods. Others were modified with ECM systems to serve as control ships in bomber flights, while a coveted few others replaced the cargo bay in the tail for an extensive ECCM suite for extreme electronic warfare missions.

After the mercenary incursions, thousands of Starlancers were sold off on the open market and adapted for a wide variety of missions - surface-to-orbit passenger flights, light cargo hauling, private yachts, smugglers, and even police interceptors. Despite their age T-25s and their variants are still a common sight on the outer rim today. 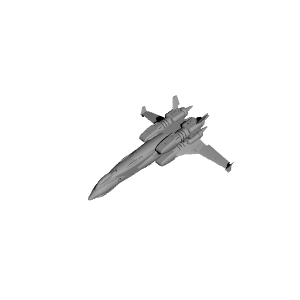