3D
Featured
16,857 views 1,048 downloads
15 collections
Community Prints Add your picture
Be the first to share a picture of this printed object
0 comments

The initial idea was to create a model honoring the original skull geometry of the great and almighty Tyrannosaurus Rex. As a result I came up with a hi-tech skull mask enhancing visually the aggressiveness of the mythic T-Rex dinosaurs.A bit of background for Tyrannosaurus Rex dinosaur. Tyrannosaurus was a bipedal carnivore with a massive skull balanced by a long, heavy tail. Relative to its large and powerful hind limbs, Tyrannosaurus forelimbs were short but unusually powerful for their size and had two clawed digits. Although other theropods rivaled or exceeded Tyrannosaurus rex in size, it was by far the largest carnivore in its environment. In fact, the most complete specimen measures up to 12.3 m (40 ft) in length, up to 4 metres (13 ft) tall, and up to 6.8 metric tons in weight. 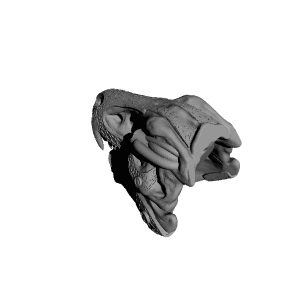