3D
Scan The World
3,479 views 285 downloads
4 collections
Community Prints Add your picture
Be the first to share a picture of this printed object
0 comments

This piece is an astonishing example of the art of goldsmiths in Cologne in the period 1150-1200. The inscriptions and imagery all suggest that it functioned as a portable tabernacle rather than a reliquary (a container for holy relics). A tabernacle held the pyx, a container for the consecrated bread used in the Christian Eucharist. This tabernacle would therefore have been used in processions or would have been set on an altar for veneration.

The work here is closely related to a group of enamelled pieces that include the very similar but smaller cross-shaped and domed tabernacle in the Kunstgewerbemuseum in Berlin. It is highly likely that this tabernacle, and the one in Berlin, are the earliest examples in the form of a cruciform church with a dome.

Recent conservation revealed a parchment written in 1855, signed with the name of the dealer Carrand. According to this new evidence the tabernacle was thought to come from a Benedictine monastery in Cologne. Saint Pantaleon is likely to be the original location. The shrines of Saint Marinus and Saint Albinus are both still preserved there and their enamel reliquaries are stylistically very close to this piece. 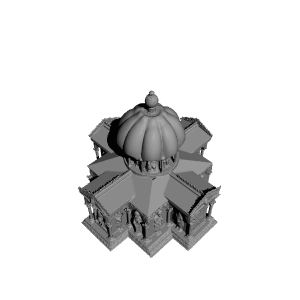 ×
4 collections where you can find Tabernacle by vam