3D
Featured
11,924 views 931 downloads
4 collections
Community Prints Add your picture
Be the first to share a picture of this printed object
1 comments

The Taj Mahal is a white marble mausoleum located in Agra, Uttar Pradesh, India. It was built by Mughal emperor Shah Jahan in memory of his third wife, Mumtaz Mahal. The Taj Mahal is widely recognized as "the jewel of Muslim art in India and one of the universally admired masterpieces of the world's heritage".In 1631, Shah Jahan, emperor during the Mughal empire's period of greatest prosperity, was grief-stricken when his third wife, Mumtaz Mahal, a Persian princess, died during the birth of their 14th child, Gauhara Begum.Construction of the Taj Mahal began in 1632.The court chronicles of Shah Jahan's grief illustrate the love story traditionally held as an inspiration for Taj Mahal. The principal mausoleum was completed in 1648 and the surrounding buildings and garden were finished five years later. 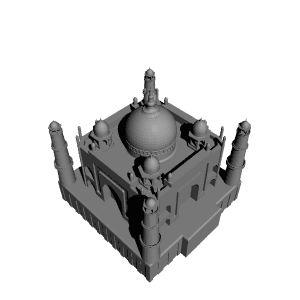 ×
4 collections where you can find Taj mahal by prabhakar21987