Tamma at The British Museum, London

3D
Scan The World
2,954 views 165 downloads
Community Prints Add your picture
Be the first to share a picture of this printed object
0 comments

Tamma at The British Museum, London

Formerly displayed on a wooden base labelled "125204. Bust of Tamma, daughter of Shamshigeram, holding distaff and spindle. Palmyra. Early 2nd century A.D. Limestone". This display label and mid-2nd century date followed by Robert Hoyland in his illustration of the object in 'Arabia and the Arabs' (p.133, pl.18)."Treasures of the World's Cultures: The British Museum after 250 Years" catalogue entry

The inscription names this woman as Tamma, daughter of Shamshi geram, son of Malku, son of Nashum. The portrait would have accompanied her body in the cemetery at Palmyra, where various types of tombs were built for wealthier citizens: tomb towers of several storeys, single storey house tombs, and underground rock-hewn tombs. All the tombs contained compartments set in the walls to hold the remains of the dead. Each compartment was sealed with a plaque bearing a sculptural portrait of the deceased and a brief dedicatory inscription.
The merchant families of Palmyra, which lay on the border between the Roman and Persian worlds, displayed their wealth in life and death. Tamma is surrounded by the splendour of her worldly possessions, a testament to her success in life, and holds a spindle and distaff, possibly symbols of her household position. The Palmyrenes adopted with enthusiasm the Roman tradition of individual portraiture. 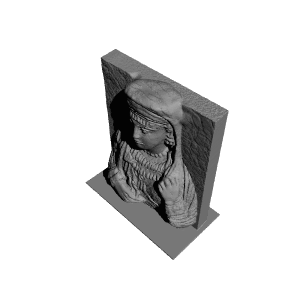 ×
0 collections where you can find Tamma at The British Museum, London by Scan The World