3D
Scan The World
1,805 views 84 downloads
Community Prints Add your picture
Be the first to share a picture of this printed object
0 comments

Crafts flourished in the Hellenistic age, as the expansion of the Greek world opened new markets to artisans and their employers.

Precious materials such as gold, silk, and ivory were more readily availabe, and an increase in private wealth created a new demand for skills in working them. Alexandria in Egypt became renowned as a centre of the production of luxury goods, including fine glass, faience, metalwork and sculpture.

Small-scale sculpture in marble, bronze and terracotta was made throughout the Hellenistic world. Some pieces might travel far from their place of manufacture and so promote the wide circulation of new subjects and styles. It is often difficult to say whether a particular small-scale sculpture was designed for sacred or secular use: very similar objects have been found in tombs and sanctuaries, or decorating private houses.

During the Hellenistic period many new types of terracotta figures were created, many of them inspired by larger scale sculptures. These statuettes represented the wealthy elite, dressed in the latest fashions, and many still preserve their bright, original colours. They were mould-made, so types could be repeated, although sometimes different attributes were added for variety. They served both a domestic and funerary function. The statuettes were nicknamed 'Tanagras' because many examples were discovered at Tanagra, a city located in central Greece, but such figures were made in workshops all over the Mediterranean; the type of clay helps distinguish one regonal workshop from another. See galleries 69 and 73 for other examples of this type of statuette. 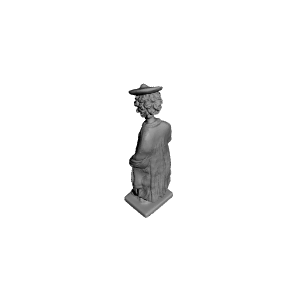 ×
0 collections where you can find Tanagras by Scan The World