3D
Scan The World
3,932 views 262 downloads
2 collections
Community Prints Add your picture
Be the first to share a picture of this printed object
0 comments

Tapirus indicus, the Asian or Malayan tapir, is the largest of the four living species of tapirs, weighing around 350 to 400 kg (800 to 900 lbs). Its coloration is unusual, with a broad white ‘saddle’ on an otherwise black coat. This pattern creates a disruptive camouflage that helps break up the tapir's outline, making it more difficult to see in the forested areas in which it lives. The Asian tapir is a remnant of a much more diverse assemblage of tapirs that once ranged across much of Europe and Asia. This group included the giant Tapirus augustus from the Pliocene of southern China, a close relative of Tapirus indicus that was the size of a small rhinoceros. Unfortunately, the future survival of the Asian tapir is questionable – largely because of loss of habitat resulting from human population growth. It is listed as ‘endangered’ by the IUCN Red List of Threatened Species. 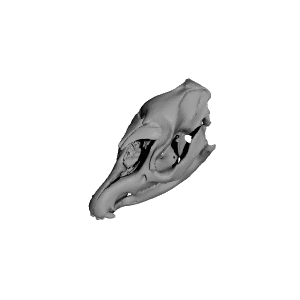 ×
2 collections where you can find Tapirus indicus, Asian Tapir by Digimorph