3D
Scan The World
2,691 views 169 downloads
1 collection
Community Prints Add your picture
Be the first to share a picture of this printed object
0 comments

Telemachus (/təˈlɛməkəs/ tə-lem-ə-kəs; Greek: Τηλέμαχος, Tēlemakhos, literally "far-fighter") is a figure in Greek mythology, the son of Odysseus and Penelope, and a central character in Homer's Odyssey. The first four books of the Odyssey focus on Telemachus' journeys in search of news about his father, who has yet to return home from the Trojan War, and are traditionally given the title the Telemachy.

Telemachus was the son of Odysseus and Penelope, left behind when his father sailed off for the Trojan War. Grown up, Telemachus was one of the first to recognize Odysseus when he finally returned to Ithaca. The son then proceeded to assist the father in the mass murder of Penelope's suitors. Bienaimé carved two copies of Telemachus Arming, now in the Hermitage. 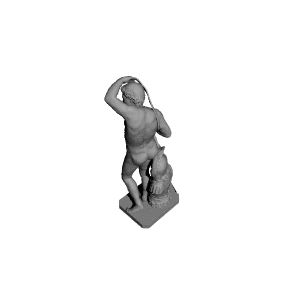 ×
1 collections where you can find Telemachus Aiming at The State Hermitage Museum, St Petersburg by Scan The World