Telemachus being welcomed in Pylos by Nestor

Telemachus being welcomed in Pylos by Nestor

This work obtained the 2nd prize in the triennial competition of the municipal Grand Prix of sculpture at the School of Fine Arts in Toulouse.

It was given by the artist to his hometown in appreciation of the scholarship that the latter granted him and it was initially installed at the Ingres museum where it remained in sight of visitors until 1968.
That year, it was broken during a move and stored for restoration purposes until 1994. The piece was restored thanks to the generosity of the sculptor's daughter, Madame Duffet-Bourdelle. On this occasion, two white plaster casts were made for the Bourdelle museum which also preserves two preparatory drawings of this work.
Indeed, here we can appreciate the plaster of the original piece, made in that occasion thanks to Bourdelle's daughter.

The bas relief represents in the foreground, standing and naked, the young Telemachus, welcomed by King Nestor, who can be recognized by his beard, a symbol of wisdom and maturity; the character on the left to whom the restoration could not return his head, no doubt disappeared during the disastrous displacement, is Transymède, the son of Nestor. Behind, from left to right, we recognize the old Mentor under whose features the goddess Athena hid in order to better protect the son of Ulysses. Finally, the last character is Pisistratus, another son of Nestor.
This skilfully composed work testifies to Bourdelle's perfect mastery of space, from an early age, as well as a very good understanding of the lessons of his masters. 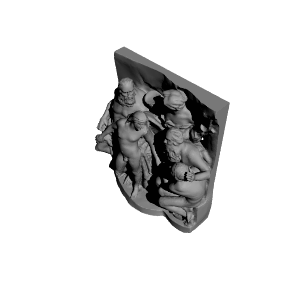