3D
Scan The World
4,042 views 398 downloads
1 collection
Community Prints Add your picture
Be the first to share a picture of this printed object
0 comments

This is a teak carved sculpture of Dvarapala, a wrathful demon tamed and converted to Hinduism, a suitable guardian for a temple threshold. This example, fanged and highly animated, was meant to terrify any enemies of the temple god. He holds a club and has assumed a warrior pose borrowed from theatre and temple dance. His flamboyant headdress is also inspired by theatre costume.

In Kerala, South-west India, wood was widely used instead of stone in temple architecture and sculpture 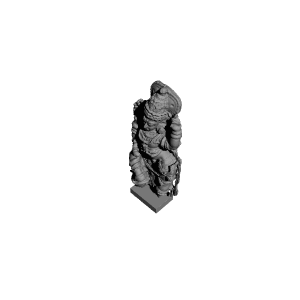 ×
1 collections where you can find Temple Door Guardian by vam